Two weeks ago as the coronavirus was silently stealing into our lives, I made my usual weekly trip to Costco. But, of course, it was not my usual weekly trip. It was sheer mayhem! People were pushing and shoving, grabbing boxes, crashing carts into one another. Elbows poised for attack. Faces wiped of smiles. The clerk told me the paper towels and toilet paper had been cleaned out days ago. “Try to be here when we open,” she suggested.

As I drove home, I contemplated all the chaos. How odd that a strange little virus, a quirk of nature that we could not figure out, was closing schools, canceling sports events, and sending humans in droves to the grocery stores desperate for toilet paper. That morning my three upcoming events in Albuquerque were canceled. I knew this would probably cascade into cancelations from Los Angeles and Salt Lake, too. (It did.) The headlines declared we were diving into a pandemic, and on the news Lester Holt explained that a pandemic happens when a new disease for which people do not have any immunity spreads around the world.

Knowing a “pandemic” was beyond my control, I pulled out my laptop and sat down on the patio to cancel my reservations. After a week of rain, the sun was cutting a golden path across my backyard. As I wrote, the sun warmed my back and a cactus wren who likes to sunbathe on the block wall perched herself near me. Her song was shrill and demanding. I stopped tapping. I started listening. She had a stunning voice, and she held my attention with her message.

Of course, she was right. I had been missing the show. Missing the bigger picture. The peace. The beauty. The wind sculpture was throwing dancing shadows across the back wall that were reminiscent of Matisse’s dancers and beneath my little warbling friend the sun had thrown a ring of light onto the new pink guara that I had planted in the fall. The guara had shot up at least a foot in the last month, and it was sprouting fragile pink flowers that would rival any wedding bouquet, and it was aglow with a halo of light. I marveled at it.

In that moment I could feel the shimmer of spring coming. No virus. No cancellation. Nothing would stop it—the cycle of life would thread a path forward, and under the circumstances, I might have time to embrace it. To appreciate it. Of course, I wish the same for you.

As we try to meet the challenges of kids out of school, out-of-stock everything, and a lurking virus, may we notice the sun and the flowers and the trees—and may we be thankful for what we do have. 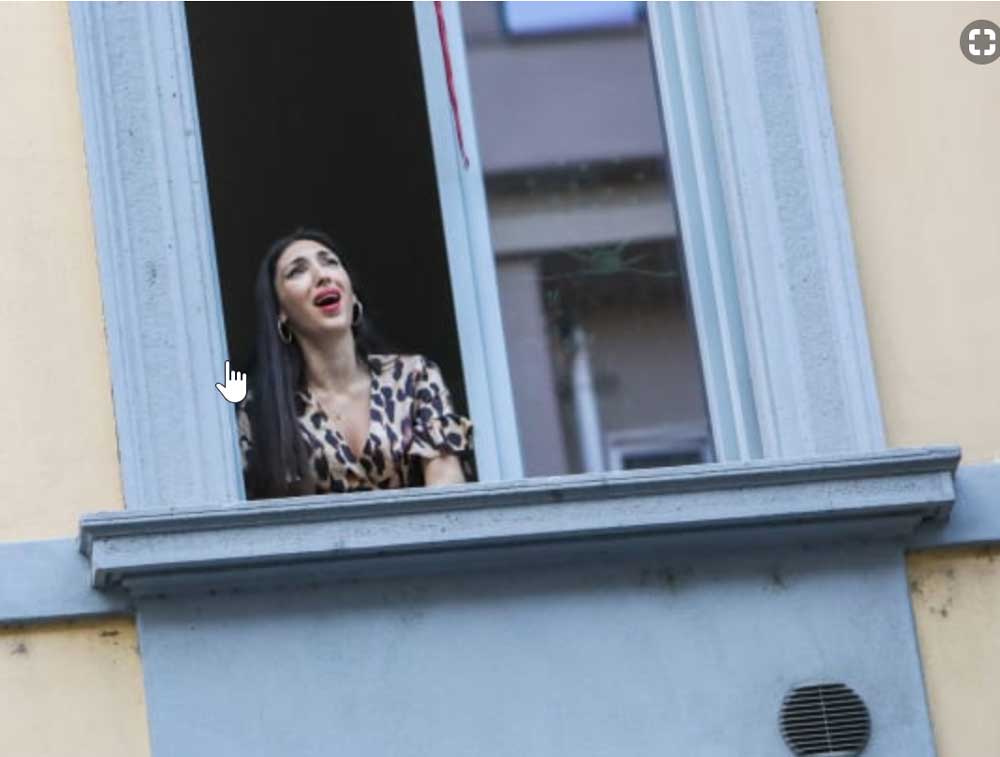 A girl sings from the window during the flash mob, March 13, 2020. Some people have organized a flash mob asking to stand on the balcony and sing or play something, to make people feel united in the quarantine. Getty Images

Upon finishing this blog, I discovered this heartfelt poem and I had to share it—

They say that in Wuhan after so many years of noise

You can hear the birds again.

They say that after just a few weeks of quiet

The sky is no longer thick with fumes

But blue and grey and clear.

They say that in the streets of Assisi

People are singing to each other

across the empty squares,

so that those who are alone

may hear the sounds of family around them.

They say that a hotel in the West of Ireland

Is offering free meals and delivery to the housebound.

Today a young woman I know

is busy spreading fliers with her number

So that the elders may have someone to call on.

are preparing to welcome

and shelter the homeless, the sick, the weary

All over the world people are slowing down and reflecting

To how big we really are.

To how little control we really have.

To what really matters.

So we pray and we remember that

But there does not have to be hate.

But there does not have to be loneliness.

But there does not have to be meanness.

But there does not have to be disease of the soul

But there can always be a rebirth of love.

Wake to the choices you make as to how to live now.

Listen, behind the factory noises of your panic

The birds are singing again

The sky is clearing,

And we are always encompassed by Love.

Life can be difficult. I just finished a class at Integrative Medicine at Mayo Clinic where my writers tapped into dozens of stories– the story of a woman who had the courage to leave her wheel-chair bound but abusive husband, the story of an award-winning engineer who was unexpectedly laid off, the story of a mother’s suicide and a daughter’s sex change, the story a drunk driver who took the life of a young fiancé, and the story of a birth mother who recently contacted and reconnected with her own kind-hearted birth mother.

These were all hard stories, and sooner or later each one of us realizes we, too, are faced with a challenge. I still remember the day of my cancer diagnosis. Steve was a thousand miles away on a business trip. After a robot-like radiologist read my diagnosis, I drove home in a zombie-like state.  The doctor’s words echoed in my brain like a death sentence. Within minutes of arriving home, I was curled up in a fetal position on the cold tile of kitchen floor, rocking back and forth and feeling trapped in an undertow. It was after 6:00 pm and the last rays of sun were disappearing from the winter sky. The darkness engulfed me.

The next day I walked, I prayed, I talked to a friend, and I went to my local bookstore where I bought my bright red “I have cancer journal.”  I began to scratch out my story. The words were halting at first. The thoughts were frozen and needed time to thaw. Later I recall scribbling loudly across the page that I did not want cancer for a story, but if it was my story, I was going to write my way forward. The story would not define me. In coming weeks as I made the trek from surgeons to radiologists to oncologists, I wrote this story. Slowly. And later I would rewrite it.

As I began to help other cancer patients and community writers to write and release their stories, I came to understand that I had always been a storycatcher—and perhaps you are as well. Storycatching embraces listening to a story wholly in the moment—the emotions, the images, the perspectives, and insights. If it is a painful story, you can give this story a new frame to hold it. You can rewrite and even re-vision it, finding the new possibilities. Perhaps you can transform your story and allow it to become the new story it needs to be. My cancer story became the framework for my current research, writing, and workshops on story.

What a gift to watch students find and rework and reframe the power a story has on them. At the end of my last class, Michele shared her beautiful poem on story. It is an honor to share it with you—

They whisper and wait,

the stories that exist inside of me.

I write about what once was,

to release them, to set them free.

Elusive details captured on a page.

My blank messenger conspires with me,

coaxing the story out of hiding,

and snaring it for other eyes to see.

The words and emotions transferred from

me to you and from you to them.

My story becomes your story,

because you understand where I’ve been.

My story released; my mind can now expand.

no longer weigh me down or slow my pace.

There once was a time when I told myself,

that silencing our stories gives us strength.

Not sharing our stories highlights courage

and defines how we conquer moving on.

I now know that lie was just a trapped story,

convincing me that it should stay hidden,

in the dark and under the bed.

A believer, I was, that a shared story

“Don’t look too closely,” it whispered,

I now know the truth about the stories,

hiding in the crevices of my mind:

walking with the shadows is uncomfortable,

but it is there where freedom is found.