Her skinny legs wobble as she teeters on the heels she borrowed from her friend for this occasion. She approaches the podium timidly, but her handshake is stronger than you might imagine. Someday she will speak from a podium like this one, but not yet. Today Cory is barely eighteen, and she shakes a bit as she poses for the mandatory photos and clasps the hands that reach to congratulate her. Cory is trying to make her dream happen. Kaye would like that. Kaye would like her—and this moment is for Kaye.

Twenty years ago, my best friend from high school gave up on this life. For two decades Kaye had tried to bear a life of disappointments coupled with chronic depression, but she could no longer manage it.

Kaye’s passion centered on children—promising youth. A creative and gifted young teacher, she took a stand against “teaching to standardized tests.”  This act of courage brought a halt to her early teaching career.  She never talked of this. She tried to be equally silent about the mental illness, the depression, that plagued her family—and would dog her life.

When her early teaching career ran amok, she moved to southern California where she found love. When she had a miscarriage and her love shattered, she made her way up the coast—and stopped returning my calls. But years later, shortly before her death, she wrote a letter to our friend, Jim. In it she thanked him for our friendships, and she even sent her love to me, admitting she let go of her friendships because she was embarrassed by the depression that had knocked her life sidewise. Just recently Jim sent me a copy of this letter.

While the words ripped me open, they also helped.  In the end Kaye found her voice and admitted her truth. Amid her illness she seemed to be shining a light, as only a star can do, on something important. On unresolved depression.

At our recent high school reunion, Paul, Freddi, Jim, Larry, Tim, Pat, CJ—and many others who loved Kaye, came together because we wanted to write a better ending to Kaye’s story. We decided to host a “promising youth” scholarship.

“Thank you for this scholarship,” Cory wrote in her note to me. “I plan to study social work and addiction counseling.  While I am unable to live with my siblings in our home because both my parents suffer from substance addictions, my grandmother is my hero. She has given me a home and taught me to have a dream.”

“My dream,” she wrote, “is to make a positive difference in the lives of others who need our help.” A promising youth, a genuine “star” –I believe Cory will make a difference. 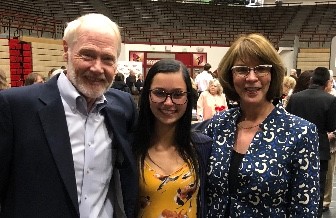 (My high school pals, Paul and Freddi, at the award ceremony with Cory, in the center.)

Somewhere Over the Rainbow