The day I moved into the graduate dorm everything changed. I made a new friend. Steve. I wondered why he leaned forward as he shot through the graduate dorm cafeteria toting a huge stack of textbooks. But he had a dream—and he was going after it. I liked that. I also appreciated that he immediately volunteered to fix my vintage Raleigh three speed bike, bequeathed to me by my brother.

The day before Noah had accidentally knocked over my Raleigh.  The bike seat had been twisted oddly, and I could not ride it. Noah did not apologize.  I had just broken a date with him, and he was mad. I would say I had broken up with him, but even after dating for two years, I still did not think of him as a boyfriend.

As an undergrad I had trouble finding love. The odds were good at my college:  seven guys for every girl, but still—I struggled. Benji, an upperclassman, always wanted to take me to the Pig and Whistle to down a pitcher of beer and shell a couple of pounds of peanuts. Since I was underage and oblivious to false IDs, we usually ended up at the only movie theater in town. Often it was a film, like 2001: A Space Odyssey, that I had already seen a half dozen times.  I was relieved when Benji stopped calling.

Although I rarely went out with him, Noah seemed to think we were a thing. He had thick-Beatle-styled hair, that you wanted to touch.  He walked with a swagger, had a square jaw, and an Adam’s apple that bounced when he talked. My roommate was crazy for him. “He looks like Ashton Kutcher—and oh, that walk!” Noah was headed to vet school. His passions circled around Irish setters and the game of chess. I could not weigh in on either. Instead I longed to talk about the Herman Hesse book I was reading, and Rodney, the nine-year-old I was tutoring at an inner-city Presbyterian church.

For two years Noah hung on. Our dates often ended up at his frat house where we would “twist and shout” to the sounds of Fleetwood Mac or the Rolling Stones. I never understood much of what he said as we shouted back and forth over the music and sipped Boone’s Farm Apple Wine from paper cups. At the end of college, many of our friends were marching down the aisle. I began to worry that I might be alone forever, but still, I was relieved to graduate from college—and college frat parties.

On the day I moved into the grad dorm, Noah caught sight of me returning from the bookstore with a new book. I had last seen him at a friend’s wedding. “How about dinner at the Pig and Whistle?” he asked. When I turned him down, foolishly explaining I had a new book to read, he stared at me as if I had slapped him. This would be the last time I would ever see him, and in his haste to leave, he turned and collided with my Raleigh, crashing it over.

In that moment my understanding of love suddenly shifted. I had a deeper sense of what love might be, and I knew Noah and I weren’t in love and never would be. Maybe I had liked the security of having him around and he was cute, but suddenly none of that mattered. At that moment, I had a glimmer of what love could mean, and I wanted to hold out for it. I thought to myself– I am done dating. I am done looking for love. I will let it find me.

That evening before I headed up to my dorm room to start a new book, I played a few hands of gin rummy with Steve in the lobby of the grad dorm. I told him I was done dating. Done with trying to find love. He nodded like this was reasonable.

The next day on the first of our many bike rides out to a small airport where we picnicked, Steve and I agreed to be friends. And, of course, this is how I would finally find love. Through friendship.

I have three doorknobs from old Victorian houses. They sit right in front of me near the kitchen bar where I write. An Etsy artist has converted these doorknobs into clocks—and I love them. For me each doorknob represents a house with its rich history and many moments. Here I often pause and think about our moments. Especially at the start of a new year.

I had a moment this week—and I bet you did, too. Mine happened after our big Christmas brunch, a long-held family tradition inspired by son’s love of cheesy eggs and bacon—although he no longer eats bacon.

But on Christmas Day and for weeks before, I am more Martha than Mary. I clean. I scrub. I bake coffee cake from my mom’s recipe and ice dozens of sugar cookies. Then on Christmas morning my family comes, and there is a flurry of opening gifts, surprises, and the experience is laced with eggnog, coffee cake, and followed with cheesy eggs and potatoes. 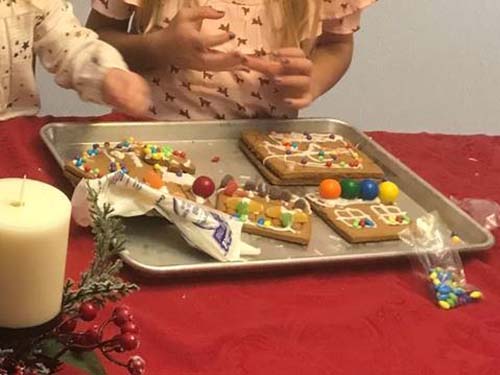 This year my three grandchildren received a Gingerbread House kit from Santa. After brunch, amid all the chaos and toys, they seized on this gift and headed to their workspace table—my unused dining room. Macy, the seven-year-old, had the two-year-olds in tow. After she ripped open the box and scanned the directions, she carefully doled out the gumdrops to little Stevie and the icing tube to Harper. Macy held tightly to the candies. For over an hour they labored over the gingerbread walls to create designs and decorations that would rival any Jackson Pollack painting.

Eventually the sounds of children’s voices called to me like a Siren, and I found myself slipping silently onto a dining room chair where these little cherubs were fully engaged. Even I was in the moment. Three lovely children on Christmas day were playing together. Exuberantly. Even joyfully. Their fingers were covered with icing and they were eating as much of it as they were using to decorate and glue candies and gumdrops onto the walls of the deconstructed gingerbread house.

What happened next surprised me. When their design looked complete, Macy tried to glue the four walls of the house together with icing, but each time she stood the walls up, they fell. On her first try the children were quiet with surprise when the walls collapsed. But then the magic that seems to come of Christmas kicked in. Without a word Harper and Stevie held the walls for Macy as she plastered the edges of the gingerbread house with more icing. When they were ready, they let go again. But this time one of the walls broke in two as they all tumbled over. No moans erupted. Instead Harper giggled first. Then they all laughed, and she added, “This is a silly house and needs a new design.”

They studied the pieces. “I think we can stack two walls together and make two beautiful cookies,” Macy announced. Then she looked up, caught first my eyes and then the eyes of her cousins before adding in all earnestness, “Play is hard work. Sometimes you have to help each other fix whatever breaks.” The cousins nodded. “We will make cookies instead of a house!”

“Gingerbread Oreos,” Harper corrected him. They squealed with delight. And that was my moment. Children at play. Children in the moment. Children reminding me that laughter, joy, and fixing things together works whether you are seven or seventy years old. In 2019 I am holding tightly to this special memory.

Wishing you a new year filled with moments to cherish and share!

“How did you ever find Skaneateles, New York?” a friend asked when I said I was heading there for a book event. “It’s a lovely hidden town,” she explained, “but when you said you were headed to New York, I hoped you meant the Big Apple.”

Truth is I did not know much about Skaneateles. I looked it up and found it was in upstate New York and about 62 miles from Rochester and 140 miles from Buffalo. The most recent population count was 7,209. Make that 7,211. My friend, Sarah Goode, and her husband Kevin had visited there a few years back and decided to stay. Permanently. She and the local librarians invited me to come and talk about my book, and the work I love doing — sharing stories and the power of our personal writing. I went.

The first day Sarah and I hiked over to Skaneateles Lake, a charming “Finger Lake.” On our hike we passed dozens of small little shops sporting local art, women’s apparel, cooking goods, and locally made treats. Small and unique shops such as the Chesnut Cottage and the Rhubarb Kitchen Shop. At each stop someone said “hi” to Sarah, and often someone would wave at me, too, and say, “You must be the author!” Let me make this clear, I am not famous. Not even remotely. But this gracious town had plastered posters of my talk in the shop windows. It was heart-warming how they reached out to me!

We made our first stop at the community hub. It is the Skaneateles Library where librarians extraordinaire, Nickie Marquis and Deanna King, welcomed me as any writer dreams of being welcomed — they had promoted me, set up press interviews, and accommodated my talk with the perfect space and the latest technology.

That evening I opened my talk with a bit of my story. A tale of teaching story and writing to students, cancer patients, veterans, and writers. As is often the case, the crowd was eclectic in age and experience, but there was one common denominator. The room exuded an energy. A positive energy that could only come from a place where people felt a part of something wonderful. A caring community.

I shared stories of a Marine who wrote his way past his PTSD from combat and a stage-four breast cancer patient with a newborn who wrote a blog to help her find her find her path through cancer. I closed with poems by a woman who has overcome the trauma of rape by creating “you can overcome” poems. The audience laughed and even teared-up with me. They understood our need to break our silence, find our words, and use them to heal and transform our lives.

Afterwards, the locals asked wonderful questions. “How do I begin to write my story?” “How do I write about my trauma and not hurt others?” A local lawyer in purple tennis shoes stood in a long line to greet me, “I just wanted to say thank you for coming here. I had forgotten the power of writing, and I know I must tell my story!” The next night, a tall stately woman with a cream-colored straw hat, stopped me at the library’s guitar concert to whisper. “Thank you. I want you to know I am inspired by your work. Last night I pulled out my journal for the first time in a long time. I had forgotten how we need to find and share our stories.”

And I knew it was true. It was important to come here. The community I found was a treasure I will hold in my heart for a long time. It will make me work harder to build and find a greater sense of community in my own life. Small towns can be gems. Community — wherever we find it — matters even more.